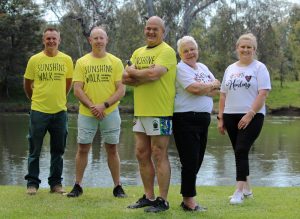 CYCLISTS will take on cancer survivors in a ride-walk challenge this Sunday that will kick off a week of fundraising for the Albury Wodonga Regional Cancer Centre Trust Fund.

The group of walkers led by breast cancer survivor, Regan Lions, will travel 10km on foot from the Wonga Wetlands, while cyclists who were involved in the 24-hour Sunshine Ride earlier this year, will make a 30km journey on mountain bikes from Howlong.

The walkers will be given a 1.5 hour head start to beat the cyclists to the finish line at Noreiul Park, Albury where there will be a sausage sizzle and raffle ticket sales.

The idea for the challenge was put forward by great grandmother, Marie Orr, whose husband Bill was treated for prostate cancer at the centre in 2019.

She said the challenge would kick start Sunshine Week, which is the major fundraising campaign of the Albury Wodonga Regional Cancer Centre Trust Fund running from November 1 to 7.

It includes the Virtual Sunshine Walk on Sunday, November 7.

“I decided I wanted to do something different to raise money and awareness for the cancer centre and that I’d challenge the cyclists to a ride-walk,” Mrs Orr, 76, said.

“But I hurt my leg in training, so Regan has come in to take my place.

“We need to everything we can to support the cancer centre because without it, I wouldn’t have a husband.”

Leading the group of about 10 cyclists will be Steve Ballard, who organised the Sunshine Ride last May after his wife Debbie was diagnosed with breast cancer.

“I was going in every day and I was one of the lucky ones; I only live a few kilometres away but there were people making hour trips every day,” he said.

“So to have it here in Albury is very beneficial for everyone in the local community, and to support it and give it the funding it needs is something that I definitely want to do.”

The sausage sizzle will be held at Noreuil Park from 10.30am on Sunday.

All money raised as part of the challenge will go towards team Hearts of Howlong in the Sunshine Walk.