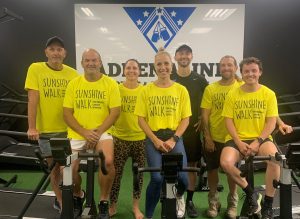 Pushing through pain and mental fatigue, a group of dedicated gym goers has successfully completed a 24-hour bike ride to raise $36,600 for the Albury Wodonga Regional Cancer Centre Trust Fund.

Six teams of five riders saddled up for the challenge on exercise bikes at Adrenaline Boxing and Conditioning on Friday, May 14.

A seventh bike was available for individuals to ride for an hour each.

Organiser Liam Forrest said the response from the local community was overwhelming, with more than 200 individuals and businesses making donations to almost double the original fundraising goal of $20,000.

“So there were a few tired bodies by the end of it, but we all supported each other and all got around the cause of raising awareness for cancer and the Albury Wodonga Regional Cancer Centre.”

“Between 2am and 6am was probably the toughest part, and a few people looked like ghosts,” he said.

“There was a great deal of support from everyone and being in a team environment really helps you get through it.”

Steve Ballard, who helped organise the ride and was a member of Team Ballard, said the plan was to come back bigger and better next year.

“We would love for other gyms and sporting bodies to come on board next year to see who can raise the most money for a great cause,” he said.

A touch of comfort for cancer patients
Scroll to top