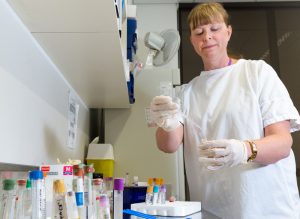 A further $27,500 provided by the Albury Wodonga Regional Cancer Centre Trust Fund will enable the Border Medical Oncology Research Unit to expand the Molecular Screening and Therapeutics (MoST) program from 50 to 100 patients.

Albury became the first regional site to be involved in the program following a $27,500 grant from the Trust Fund last September.

“Twelve patients have actionable mutations, and six patients are enrolled on clinical trials so far,” he said.

“This is in line with the published data in international literature and the experience with Australian metropolitan sites in the MoST program.

“Not all patients’ tumours have mutations that can be targeted with new treatments but a significant do.”

Prof Underhill said under the program, new treatment options are based on the personal and genetic profile of the patient’s cancer instead of where it is located in the body.

“In these trials, rather than focusing on a tumour’s location, such as the ovaries, patients with for example ovarian cancer, pancreatic or sarcoma who have a shared harmful mutation, are treated with a drug that may target that mutation,” he said.

The Trust Fund’s contribution pays one third of the trial cost, with the remainder being covered by the Federal Government.

Chair, Michelle Hensel, said it is one of Trust Fund four key priority areas to support research at the cancer centre.

“We’re excited to be involved in this amazing trial, which is a first in a regional area,” she said.

“It gives hope to people who are given a serious cancer diagnosis, that they might be involved in a trial that could change the outcome for them and future cancer patients.”

Couple asks for donations in lieu of gifts