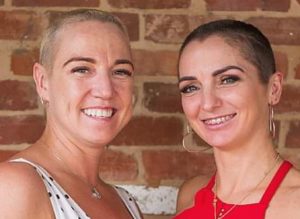 Having all been touched by cancer in some form, seven community members recently shaved their heads to raise money for the Albury Wodonga Regional Cancer Centre Trust Fund.

With overwhelming support from the Yarrawonga community, the pair was able to raise $10,200 in 10 weeks.

“We can’t thank everyone enough for getting us here,” Mrs Pigdon, owner of Beyond the Fringe hairdressing salon, said.

“It has been an amazing 10 weeks and we’re very proud of what we’ve been able to achieve.

“We started this because Lauren’s mum, Deb, was diagnosed with lung cancer and my aim was to lift Lauren’s spirits and her family’s.

“It’s all been for a good cause and we never thought that we’d do it so quickly.”

After a lump was found in her right breast late last year, Wodonga resident Vicki Bibby expected to lose her hair as part of her cancer treatment.

But rather than having no control over when it fell out, Mrs Bibby decided to do it on her own terms by shaving her head on December 12, and raising more than $2500.

“I’m choosing not to let my hair fall out on its own, but am making the best of a bad situation by supporting a local charity in the process,” she said.

In April last year, Sue Moyle was planning to host an open garden in honour of her dad, Ian, who lost his battle with cancer in 2018.

But as coronavirus meant the open day couldn’t go ahead, Mrs Moyle, her husband, Wes, and their nine-year-old daughter, Bella, instead decided to shave their heads at the Yackandandah community market on December 20, raising $1850 for the Trust Fund.

Not wanting to be left out, the couple’s seven-year-old daughter, Katherine, also underwent the big chop on January 4.

“Wes and I hadn’t cut our hair since April, and had been growing it for about 12 months before that,” Mrs Moyle said.

“We wanted to shave it all off to support an organisation that supported mum and dad for many years, as well as many others we know and love.”

As well as losing her father two years ago, Sue also lost her mum, Olive, to pancreatic cancer in 2016.

Nurse upskilled thanks to scholarship program
Scroll to top