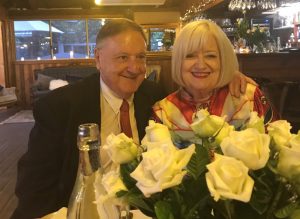 For 40 years, Paul “Macca” McSwiney has been on the airwaves bringing us all the local news from across the Border North East region.

But what the 2AY news director hasn’t shared with his listeners was a shock diagnosis in August 2019 which at 74, threatened to cut his life short.

After seeing his doctor for a persistent cough, Mr McSwiney was sent for x-rays which showed nothing on his lungs, but evidence of enlarged lymph glands.

Further investigation revealed he had a rare form of blood cancer known as Waldenstrom’s macroglobulinaemia.

After the shock of the initial diagnosis, Mr McSwiney’s wife Alex said they were immediately put at ease by oncologist, Dr Richard Eek.

“Dr Eek was just so wonderful and assured us that the prognosis was positive, and the lymphoma treatable,” she said.

He continued to work throughout that time, missing just six days at the station over the six-month period.

Having suffered little to no side effects from the chemotherapy, Mr McSwiney says he felt like one of the lucky ones.

“I felt like a bit of a fraud being there,” he said.

“I didn’t feel bad at all, I had no real illness, and I kept my hair.”

Mr McSwiney finished his treatment in February, with his test results coming back all-clear.

He is now only required to go once every three months for a check-up.

Although it was one of the most difficult times in their lives, Mr and Mrs McSwiney look back at their time at the cancer centre with nothing but gratitude.

“You go in with a little bit of fear and trepidation, but the confidence I got from everyone there turned all of that around,” Mr McSwiney said.

“I always knew the cancer centre was an asset for the town, but now I’ve experienced it first-hand, I believe to be our most precious asset.”

Mrs McSwiney said she was struck by the calm atmosphere pervading the whole centre and by the great care shown by all they had contact with.

“From being greeted at the entrance by volunteers, the friendly and efficient administration staff and the wonderful nurses who were always caring and professional, but who always maintained a sense of humour,” she said.

“As having time to observe the day to day treatment – nine hours on a couple of occasions – I could see not only how hard all the nurses worked, but their kindness and respect was given to every patient under their care.

“They have my greatest admiration and thanks.

“We are indeed lucky to have such a great facility in Albury Wodonga.”

Trust funds the fight against cancer