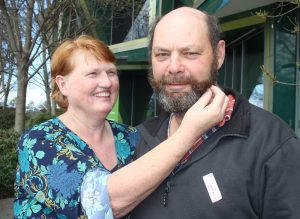 Should Jim’s beard stay or go?

UP until a few months ago, Jim Lewry had never had a beard.

Describing the feeling as like his head being “caught in a coil of barb wire,” he says it’s something that he’ll never ever do again.

But for now, Mr Lewry is sporting a bushy facial growth that members of the public can help decide if he should save, or shave.

By making a donation to the Albury Wodonga Regional Cancer Centre Trust Fund, supporters will be able to vote if he should keep his beard until Christmas or go back to being clean-shaven.

Mr Lewry, of Howlong, said he wanted to do something to help support the cancer centre after his wife, Catherine, was treated for breast cancer at the facility in 2020.

“Catherine had 16 rounds of chemotherapy and six weeks of radiation and is going really well now,” he said.

“The staff did a great job and we’re lucky to have this state-of-the-art facility right on our doorstep.”

Mr Lewry, owner of Mossy Jim’s Rocks, hopes the incentive of seeing him “suffer” with a beard may be enough to encourage people to make a donation.

“I’ve got to sit on my hands because I was just itching and scratching it, then it started to get sore underneath where I’d been scratching it all the time,” he said.

“I haven’t had anyone tell me it looks good, and I look like a criminal more than anything.

“But if people want me to keep it on longer because they know how much it annoys me, then they’re going to have vote with their dollars.”

Mrs Lewry, who recently retired from her job as a nurse, said it was “amazing” act by her husband to support the cancer centre, although she wasn’t a fan of his bristles.

“I would encourage people to vote to take it off.”