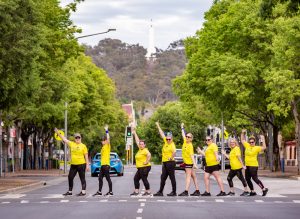 United for the Sunshine Walk

Although unable to gather in person, more than 600 people from across the Albury-Wodonga region were united in their support for the Albury Wodonga Regional Cancer Centre through the Sunshine Walk in November.

Held virtually for a second consecutive year, the event saw 56 teams walk five, 10 or 20km in their own communities and connect with other participants online.

It included teams in Walla, Walbundrie, Myrtleford, Bright, Corowa, Howlong and Yarrawonga, while there were also individuals who took part as far away as Newcastle, Blackwater in Queensland and in Perth.

Together, the walkers raised more than $235,000 for the Albury Wodonga Regional Cancer Centre Trust Fund.

Trust Fund chair Michelle Hensel walked 20km with her team, Hume Public School, and said this was an incredible result while the region was grappling with a COVID outbreak in the weeks leading up to and during the event.

“I think it’s extraordinary that the community responded this way in COVID,” she said.

“It speaks volumes about the respect that everyone has for the cancer centre.”

Completing a 5km walk around Thurgoona with family was cancer survivor, Tim Harmer who was diagnosed with lymphoma in February 2020.

After undergoing six months of chemotherapy, Mr Harmer saw the walk as a way to give back for the wonderful treatment and support he received at the cancer centre.

“The staff there are fantastic because at the time, I wasn’t too sure what was going to happen,” he said.

“But it’s all good now, I’m in remission, and I’m grateful for everyone there are the cancer centre.”

After raising more than $8000 for the walk, TVN On-Country’s Gareth Vannoort said everyone was touched by cancer in some way and the cancer centre was a fantastic asset for the region.

“So many people regionally rely on the cancer centre locally here and it’s such a great cause to get behind,” he said.

“If local companies and local people get behind it, it helps to further enhance the facilities here and better the outcome for people suffering from cancer.”

She said it was “a lot easier” than she thought.

“You get a nice group of people, you just have a chat and off you go,” Ms Cater said.

“It was lots of fun, especially having people walk past and say hello. It was just nice.”

Richard’s on the road to recovery

Richard gears up for the Bethanga Beast
Scroll to top